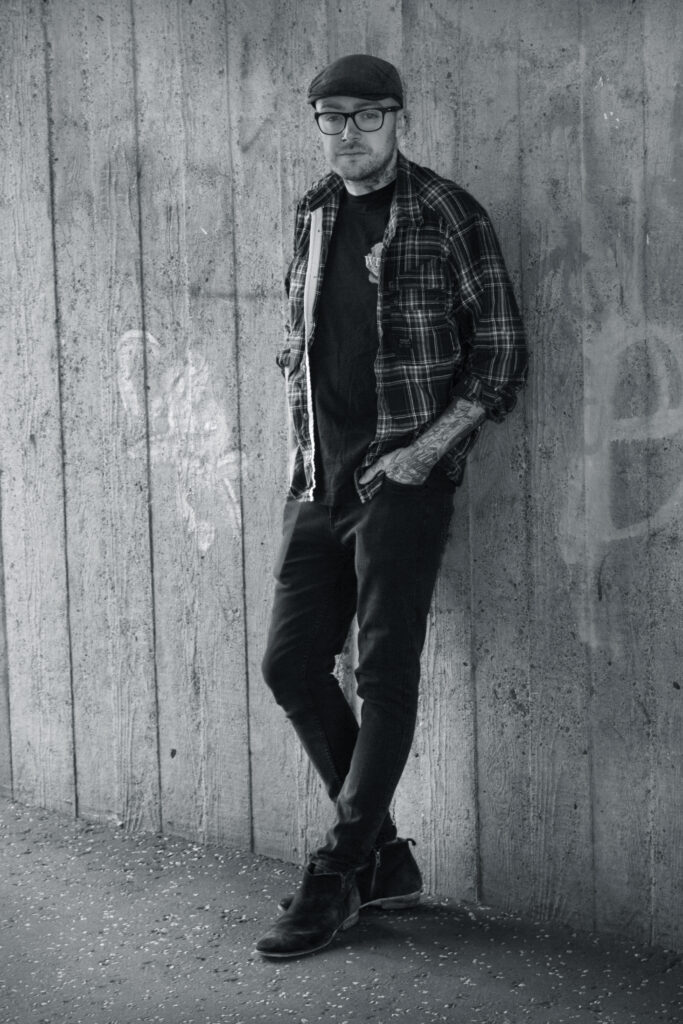 The moment Gemma’s advice hit home with me – “You need a front cover” – I thought of Mark. One of my oldest friends.

A modest guy with an extreme wealth of talent. He doesn’t shout about himself in that way though. There is no arrogance about the man. To look at him you see a trendy little fucker with tattoo’s everywhere. But to know him is to know a kind-hearted guy, with humility in par with the plethora of ink on his body.

I’d always known his artistic side as being a singer/songwriter. Acoustic songs that always sent me into deep crevices of sentimental thought. A safe little place in my mind for me to connect to a catalogue of moments lived. Whether those moments revisited were joyous or torturous it was always an experience worth having. In fact he had even written songs about cherished loved ones my family had lost. Such a man that he is, he went one further and played the songs to my family, who listened with pride.

Just as I had finished writing the first draft of my manuscript I realised Mark was trying his hand at another form of art. He was painting and drawing. Typically they were relevant, original and thought-provoking pieces. I knew fine well only he could sketch something worthy of a front cover about a story so deeply personal about my life.

I mean we have known each other since we were kids. I always picked him for my football team because he was a hardy little fucker. As one of the younger players on the pitch he was always reliable. He got stuck into every tackle. He didn’t give a fuck. A wee ankle biter taking on the larger lads. You could tell even then that he had his own mind. Every week his hair was dyed a different colour.

This was at a time in Ladywell where all the lads had to have a French crop and wear a hoop in their ear or risk the wrath of a beating. But not for ‘wee Mark’. He had his own style. No matter what.

I put the question to him about doing a sketch for me. Purely to help a mate out. Give me something visualise before I start pitching this to publishers. Selfless as always, Mark was eager to help me. He wanted to read the manuscript so he could understand the tone. I knew in that moment that our life-long friendship was about to evolve once more. He was about to learn some brutal realities about my life. I put my trust in him. Something I have never regretted doing in all the years I’ve known him.

Much was discussed between us as he read the story. I will keep that between me and Mark for now to avoid spoilers. But he told me he had a ‘wee sketch’ for me to look at. When he sent it over I was in shock. I was numb. I was amazed. NOW my book felt real. NOW I had the final piece of my story. Mark didn’t just draw me a sketch. He drew my life. He drew my suffering. He drew my recovery. He drew my front cover. I knew from that moment that all my pitches to publishers would have a side story. That side story was ‘two lads fae the scheme wae a dream’. Working together on the most intimate project of my life.

Folks, please let me introduce you to my friend AND my illustrator. The talented, unassuming and bighearted man that we call Mark Deans.

With Mark on board and the story complete, now I had to find the right publisher….

do not give up

twenty years in the making